President Muhammadu Buhari took a ride from the Marina Station to National Theatre Station in Lagos mainland shortly after he inaugurated the first phase of the Lagos Blue Rail Line.

Buhari was on the train ride alongside Lagos State Governor, Babajide Sanwo-Olu; Deputy Governor of the state, Dr. Obafemi Hamzat; some members of the federal and state executive councils; members of the federal and state legislative assemblies; President of China Civil Engineering Construction Company (CCECC), Chen Sichang and journalists, among others.

The first phase of the project, executed by the state government, which spans 13 kilometres, has five stations – Mile 2, Suru-Alaba, Orile Iganmu, National Theatre, and Marina. However, for now, the operating route terminates at the National Theatre.

Buhari also witnessed the signing of the contract for the construction of the second phase of the Lagos Blue Rail Line. Managing Director of Lagos Metropolitan Area Transport Authority (LAMATA), Abimbola Akinajo, signed for Lagos State government, and President of CCECC, Chen Sichang, signed for the foreign firm.

In his remarks, Sanwo-Olu thanked the president for the state visit to inaugurate several landmark projects, noting that since 1999, the state has not enjoyed the level of support from the federal government. 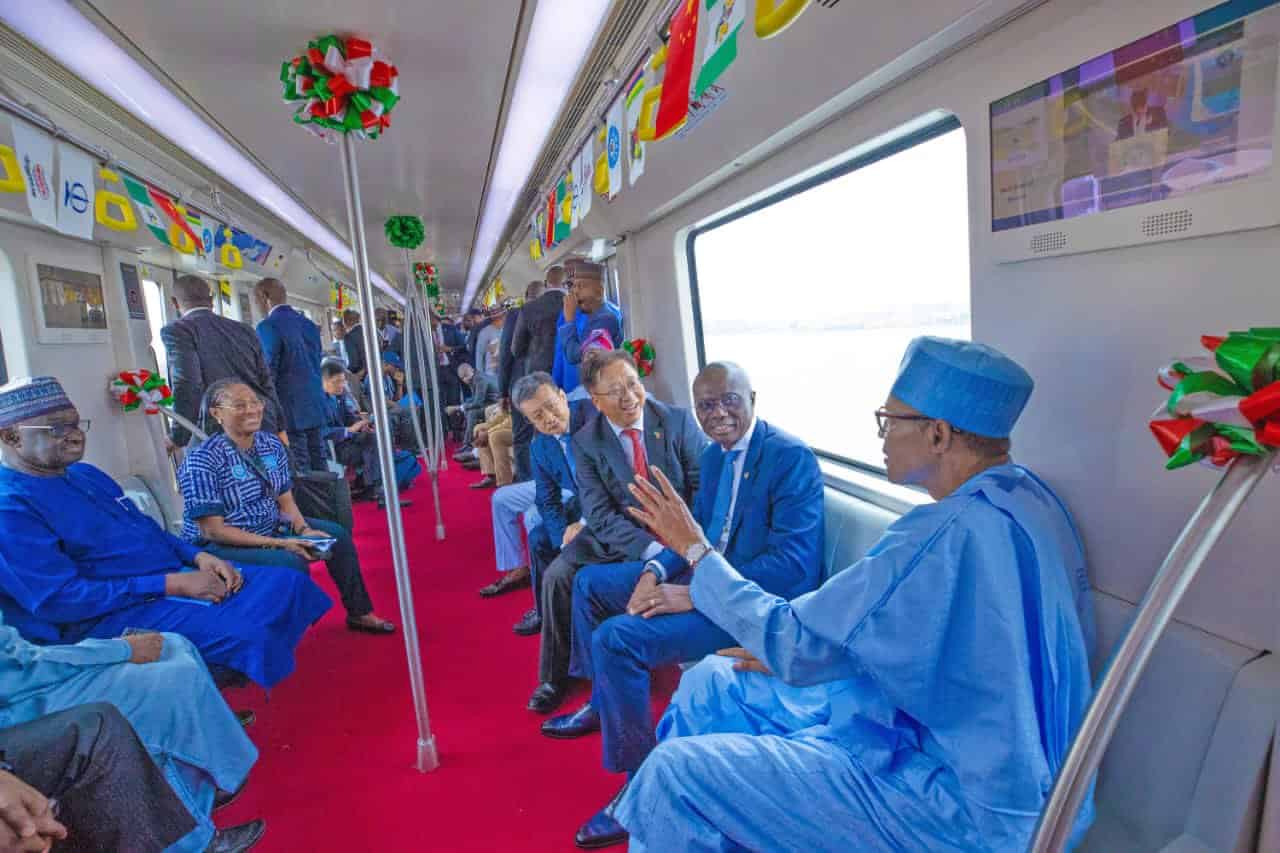 On the benefits of the project, the governor stated that it would reduce travel time, improve the quality of life of citizens and make Lagos one of the most resilient mega-cities in Africa that would compete favourably with other megacities around the world.

Sanwo-Olu hinted that he would invite the president again to Lagos, to also inaugurate the Red Line, which he described as a bigger rail corridor project compared with the Blue Rail Line.

Sanwo-Olu paid tribute to the presidential candidate of the All Progressives Congress (APC), Asiwaju Bola Ahmed Tinubu, for his timeless vision for Lagos State which dates back almost 25 years, when he took over the reins of leadership in Lagos State.

He said: “This Blue Line we are commissioning today is the product of his timeless vision for Lagos State, a vision that dates back almost 25 years, when he took over the reins of leadership in Lagos State.

“One of his greatest legacies was developing a comprehensive roadmap for the future of Lagos State; one that laid out very clearly the pathway to a modern, prosperous, and globally competitive megacity

“Over the years the journey has been eventful, and many challenges have been surmounted, including a lack of support and cooperation from the Peoples Democratic Party, when they were in power. It is not a secret that the only ambition of that party was to capture Lagos, not to support progress and development.

“They made this clear in very many ways, including the unconstitutional withholding of critical funds, and brazen attempts to manipulate elections. To his eternal credit, Asiwaju Tinubu stood his ground, and never backed down, setting out an excellent example for all of us, his successors, on the importance of believing in a vision and holding firmly to it at all times.”