This is generally how the Leftists work: first, they smear and defame someone for standing for freedom. Then they target anyone who doesn’t go along with the first smear campaign in a new campaign, excoriating the new target for associating with or speaking favorably of an untouchable, a non-person.

Pamela Geller was the victim of an extraordinary campaign of defamation and vilification that resulted in getting her and me being banned from the UK, and now Gary Mond, senior vice president of the Board of Deputies of British Jews, is under fire for liking some of her posts. What Pamela Geller actually stands for is the freedom of speech, the freedom of conscience, the equality of rights of all people before the law, and individual rights. She does not engage in “anti-Muslim hatred.” If opposing jihad violence and Sharia oppression of women is “anti-Muslim hatred,” then everyone should engage in it; the idea that opposing jihad and Sharia is “hateful” is an extremely effective propaganda invention of those who do not wish the advance of jihad and Sharia to be impeded.

The British government banned Pamela Geller because they were afraid of the Muslims in the country and anxious to appease them; to prevent violence from them, she was banned. Her support for Israel was directly mentioned in the ban, which makes the Board of Deputies approval of it all the more shameful. Imams who support jihad terror are let in with no problem.

Meanwhile, the Breivik business was not mentioned in the ban, although it is in the article below. To blame her for Breivik’s murders is akin to blaming the Beatles for Charles Manson’s murders. Her website, then called Atlas Shrugs, was in the footnotes as a source along with Barack Obama, JFK, Charles Darwin, John Locke, and many others. To say she had some responsibility for Breivik’s crimes is not stretching the truth, it’s inventing fake news.

Mond is being asked to resign essentially for being critical of Islam and cognizant of the jihad imperative. While the Board of Deputies supported the ban on Geller, they haven’t been notably vocal about opposing jihad terror and attacks by Muslims on British Jews. The idea that Mond should resign because liking Geller posts is beyond the pale is just the latest indication of the cowed and compromised condition of Jewish leadership in the UK. How many jews have to die in the cause of islamic Jew-hatred for leftwing jews to speak out against this genocidal ideology?

If the Board of Deputies of British Jews, and Britain itself, were remotely sane, not only would they be calling for the ban on Geller to be overturned, but they would be making the Geller Report required reading for all members.

“Board of Deputies senior VP asked to ‘step down’ over far-right social media posts,” by Lee Harpin, Jewish News, January 12, 2022:

Board of Deputies senior vice-president Gary Mond has been asked to “step down from his duties” while an investigation into allegations of anti-Muslim sentiment takes place.

Mond – the deputy for Israel charity JNF UK where he is a trustee and honorary treasurer – was informed of the decision to undertake a probe into his conduct on social media on Tuesday evening.

It came after Jewish News alerted the Board to historic social media posts that appeared to have been posted by Mond – including an apparent show of support for Pamela Geller, an American far-right anti-Islam activist, currently banned from entering the UK….

Confirming they had asked the deputy to stand down while a probe into his actions was launched, the Board said in a statement there was “no place” in any communal organisation for “anti-Muslim hatred.”

Mond vowed to consult lawyers over the Board’s decision to launch an investigation into him. 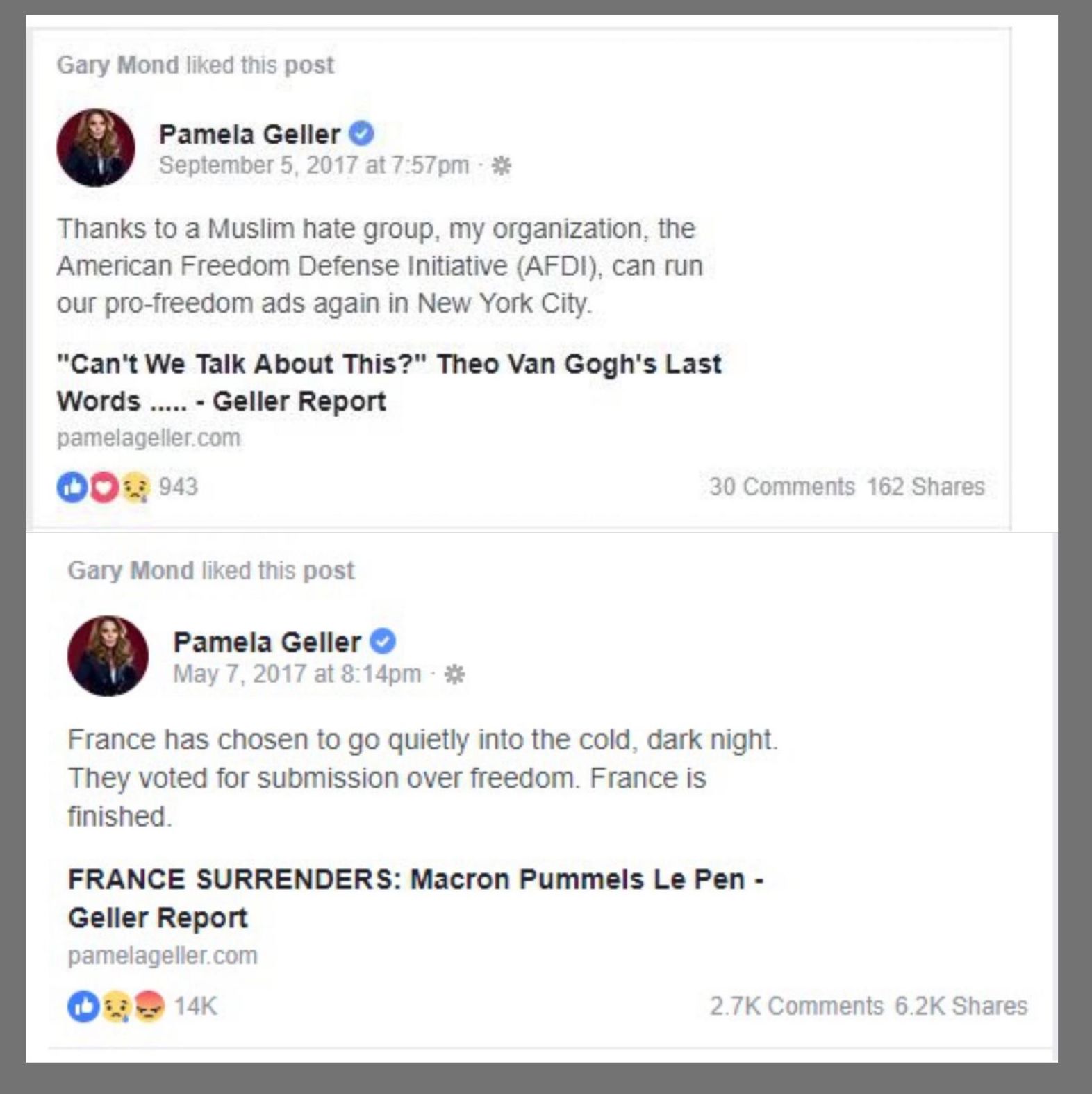 US activist Geller was banned by the British government from entry into the UK in 2013, with the authorities citing her anti-Muslim activism, and saying her presence would “not be conducive to the public good.”

Her anti-Muslim theories were cited, along with others, in the manifesto written by Anders Breivik, who carried out the terror attack in Norway in 2011 that left 77 people dead. 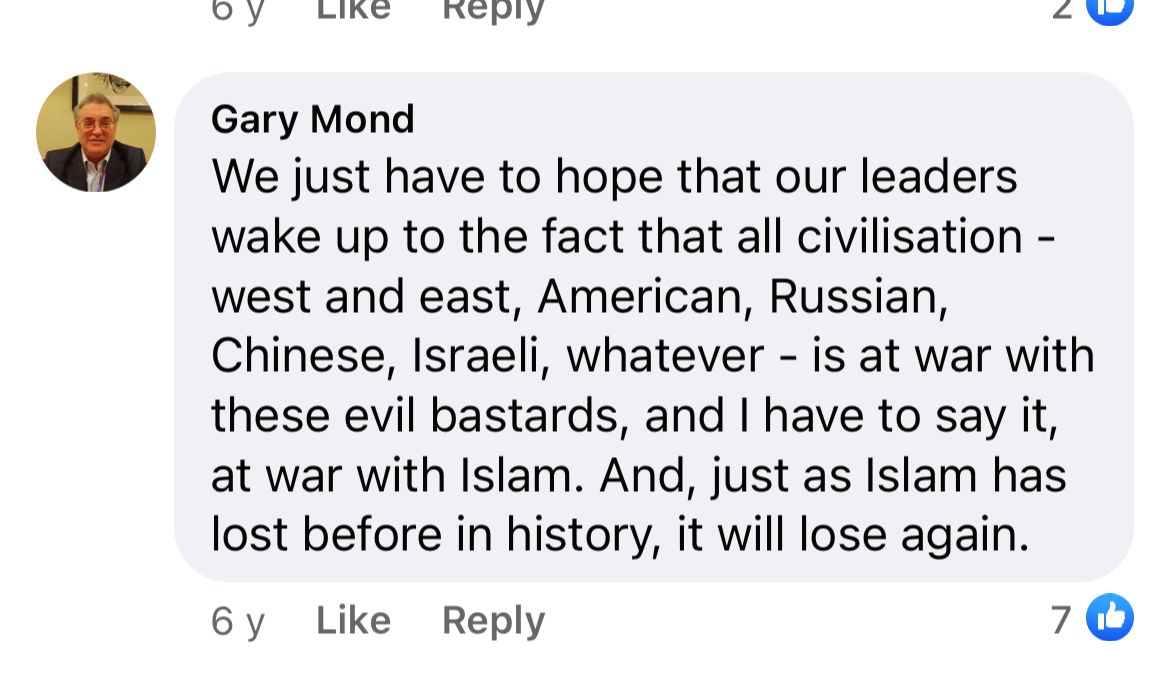 In 2016, the Board backed then Home Secretary Theresa May’s decision ban Geller, who is Jewish, from traveling to the UK where she was due to take part in a demo organised by the far-right English Defence League….

In a statement sent to Jewish News, the Board said:”Following the allegations of anti-Muslim sentiment which have surfaced we have asked Mr Mond to step down from his duties while an investigation is undertaken as is common practice.

“Mr Mond did not agree to voluntarily step down and has informed us he is currently taking legal advice.

“The Board of Deputies believes that there is no place in any Jewish communal organisation for anti-Muslim hatred.”…