The centre-back will miss this evening’s clash with Valencia due to a back injury he picked up against Real Betis over the weekend.

And it seems some Sevilla fans are not happy, with Koundé still said to be keen to leave Los Nervionenses in the long-term.

One fan took to Twitter to voice their frustration, suggesting that Koundé should have been able to shake off the injury and hinting at other motives. 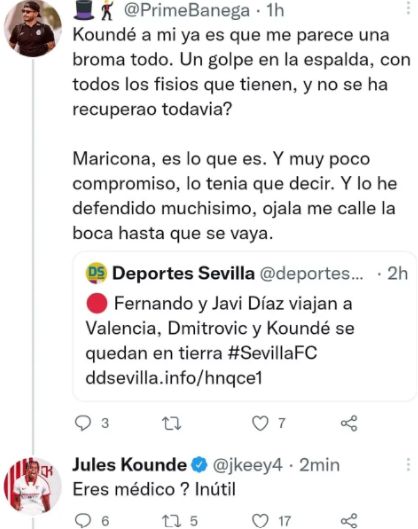 And it didn’t go unnoticed by the Sevilla defender, who responded on Twitter with a very pointed words.

He replied: “You are a doctor? Useless.”

Clearly, Koundé is unhappy to see his injury questioned, especially after performing so well for Sevilla since his 2019 arrival.

To the defender’s credit, it was made public that he was unhappy after the club blocked his summer transfer.

Even with that, he has not refused to play and he has not thrown his toys out of the pram.

In he modern football world, that deserves some credit from supporters.

The supporter has since deleted his tweet to Koundé.