Joe Igbokwe, a chieftain of the All Progressives Congress (APC) says the ruling party “will teach” detractors a lesson in the 2023 Nigerian general election.

Igbokwe who took to his known Facebook page on Thursday to make this vow, praised what he calls “the courage” of all supporters of the APC administration. He also branded antagonism of the Muhammadu Buhari administration “lies”. 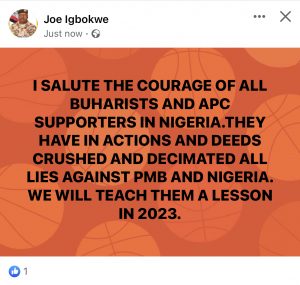 “I salute the courage of all Buharists and APC supporters in Nigeria. They have in actions and deeds crushed and decimated all lies against PMB and Nigeria.
We will teach them a lesson in 2023,” Igbokwe bragged.

POLITICS NIGERIA reports that the ruling government is not an exception to criticism.

Insurgency, banditry, kidnapping and secessionist violence are pushing Nigeria towards the brink of collapse with many calling for the resignation of the president for “failing” to secure the country.

Nobel Laureate Wole Soyinka had described the country as a war zone and the Sultan of Sokoto said northern Nigeria is the worst place to live in the country.

Critics of the government like Deji Adeyanju, Aisha Yesufu, Omoyele Sowore, Shehu Sani have all continued to attack the Buhari administration.

Germany: Muslims pray in courtyard entrance, beat man who asked them to let his car through

France: Muslim known to police calls police station, rants about Allah, says he is going to blow everything up

That age is so sensitive. They need you – Singer Simi advises parents against placing their children in boarding schools